A few days ago I received this brief email:

Hope you and your family are staying safe in this pandemic. Keep prayerful.

It was from a Turkish woman I met 10 years ago in Göreme, Turkey, in the magnificent region of Cappadocia — all fairy-tale spires, ancient cave churches and local stone dwellings. I was scribbling in a Moleskine journal at the whimsically named Flintstones Cave Bar, a glass of Efes beer at hand. I was mostly alone until about 9 p.m., when bodies suddenly filled the white-stone grotto, music began to pulse and about a dozen people danced by their glass-filled tables.

A young woman, petite with dark pixieish hair, approached me, asked where I was from, and invited me to join her small party. I politely declined. About 10 minutes later, I decided what the hell and sat at their table and bought the group a round. The woman was Kalpten, whose name I still find distractedly unusual and pleasantly exotic. She danced with her friends, shyly, when I was there.

Kalpten explained how each weekend she and her friends made the hour drive from Kayseri, a city of nearly a million people in Central Turkey, where the airport which I flew into from Istanbul is located, to Flintstones Cave Bar for music, beer and boogie.

We hit it off, but eventually I ambled into the night, up the hill to my lovely cave hotel. As I was checking out the next morning, a message from Kalpten awaited. (In our flurry of small talk, she had asked the name of my hotel.) I called her back and she insisted on driving to Göreme, picking me up and taking me to the Kayseri airport. Yes, I said. 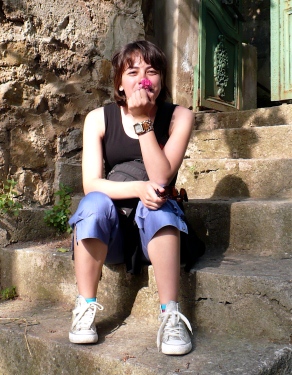 When we parted in the terminal she said she’d take a bus to see me in Istanbul at the end of the week. And she did. We spent a long, sunny day together, during which we broke up a vicious fist-fight between two young boys, sipped Efes beer, hung around the waterfront, strolled historic Sultanahmet and took a ferry to picturesque Princes Island.

And that was that. When I returned to the States, we exchanged several fond emails, then, inevitably, the flow trickled off, and a years-long silence followed.

Then the email at the top of this post came.

I promptly wrote her back, five or six enthusiastic lines. Three days later, she responded, part of which read:

So much time has flown since we mailed each other. And now we both two as all other people experience the same troubles, feelings and thoughts, we are all passing through historical and tough times.

Exactly. In these days of universal trauma and global grieving, our overdue reconnection takes on a slightly unreal complexion. It is strange, wonderful, serendipitous. Magic is not an idle player, I think. Yet tragedy is also part of the equation.

Connection is important to me, yet not as important as it is to most. A loner at heart, I prefer people in small doses. Yet this reaching out by Kalpten struck me differently, poignantly. Of course there’s the nostalgia factor — long time, no see and the triggering of a dozen warm memories — but it’s more than that. She’s a distant friend I have only wondered and dreamt about, a phantom face I can visit in a few photographs.

And now she’s real all over again. It’s not necessarily a romantic thing; it’s a human thing. That’s about all we have in these fraught times, and in any time.

Kalpten wrote: “It is really big pleasure to write you as always.”

Then she signed off.

How are you feeling?? Write me anything you want to write …

I am sipping wine as I write this, a chilled glass of Portuguese rosé that is an ideal swirl of sweet and dry, fruity and floral. It is 42 degrees outside. The fusty stereotype says that rosé is expressly a summer drink, just as some insist soup is only a winter meal. I say balderdash to both feeble-minded myths, which suffer a fatal lack of imagination.

So, indeed, I am sipping wine (rosé!). And I am thinking of an article a friend sent me about the intricate neurological processes involved in the simple joy of tasting wine. It says: “According to neuroscientist Gordon Shepherd, the flavor of wine ‘engages more of our brain than any other human behavior’” — be it pitching a baseball, basking in Bach, playing Fortnite or, I imagine, having tangly Tantric sex.

I’ll drink to that (and I did). More, and listen closely as the ideas get knotty:

“The apparently simple act of sipping Merlot involves a complex interplay of air and liquid controlled by coordinated movements of the tongue, jaw, diaphragm and throat. Inside the mouth, molecules in wine stimulate thousands of taste and odor receptors, sending a flavor signal to the brain that triggers massive cognitive computation involving pattern recognition, memory, value judgment, emotion and of course, pleasure.”

I’ll drink to that, too, mostly because that passage was as complex as some of the most sophisticated wine varietals, and it kind of gave me an instant hangover. (Shepherd’s book, by the way, is “Neuroenology: How the Brain Creates the Taste of Wine.”)

Yet so much jibber-jabber is a buzzkill. So let’s for a moment detour to Turkey, the last place I really indulged in wine. Namely to Göreme, in Cappadocia, where I enjoyed a marvelous wine tasting. Just me, the sommelier and lots of wine.

After almost crashing a rented motor scooter about four times in the craggy hills of Göreme, returning the vehicle well before it was due, I was rattled. Walking to the town center, defeated and with a comical helmet head, I caught a sign outside a handsome restaurant that said simply “Wine Tasting.” It was time for a drink, a celebration that I didn’t smash open my head toppling off the scooter into rocks and shrubs.

Apparently I stumbled upon a hotspot, the newish Mozaik Restaurant, which is rated the #1 restaurant in Göreme on TripAdvisor. (OK, it’s TripAdvisor — take it with a grain of salt.) For about $18.50 you get four tastings of the varietals of your choice. The wines come from the rugged Cappadocia region, a local tasting.

Thing is, and I’m hardly complaining, my friendly host did not pour tasting measures — a few hearty sips — but pretty much full pours. I sat there for a good 90 minutes, sipping four glasses of wine — a Chardonnay, Merlot and, of course, two rosés. They were excellent, dimpled with notes and accents and bouquets and finishes and all that jazz.

I all but forgot about the scooter drama, because, little did I know, this was happening inside my head: The wine, recall from above, “stimulated thousands of taste and odor receptors, sending a flavor signal to the brain that triggered massive cognitive computation … emotion and, of course, pleasure.” (Italics mine.)

That’s a lot of action from a sip of fermented fruit. I know shamefully little about wine — I’m no vino snob; the rosé I’m sipping came out of a box — but I can tell good grape from rotgut pretty well. All that “cognitive computation” triggered by a “flavor signal” is nifty enough. But I think many of us agree it’s the “pleasure” that’s triggered that we are after. I’d drink to that, but, alas, my glass is empty.