Though I’ve only made a wee dent in the book I got today — “Seven Types of Atheism” by philosopher John Gray — I am already bitten and beguiled. On page 33 of the 170-page manifesto, I find myself putting it down often to copy a tart line or provocative passage.

Gray, without airs but with erudition, places in his crosshairs the arm wrestle between religion and atheism, that eternal, irreconcilable chasm of belief, God and godlessness. He is acridly and relentlessly critical of both.

Dense but light on its feet, slim but chubby with fact, philosophy and opinion, the book reveals a bracing entertainer who hardly balks at taking intellectual swipes at celebrity atheists slash rational humanists like Sam Harris, Richard Dawkins and other crusaders.

Gray, says The Guardian, “is a card-carrying misanthrope for whom human life has no unique importance, and for whom history has been little more than the sound of hacking and gouging.”

That’s my kind of guy, though Gray takes things a little further than I do when it comes to faith, history and humanism. Still, his book, from 2018, is studded with eyebrow-cocking history lessons, slashing judgments and pleasing iconoclasm. A few nuggets from my early reading: 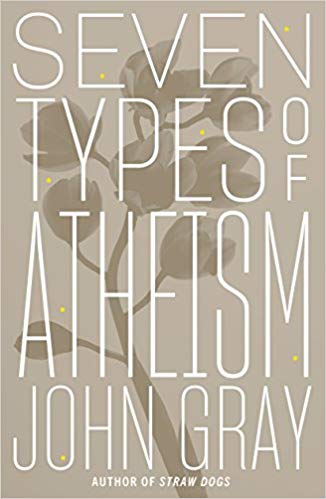 “There is no such thing as ‘the atheist worldview.’ Atheism simply excludes the idea that the world is the work of a creator-god, which is not found in most religions. … Nowhere does Buddhism speak of a Supreme Being, and it is in fact an atheist religion.”

“Many versions of Jesus and his life can be supported on the basis of existing evidence. Among the least plausible are those that have been presented as fact by Christian churches.”

“Christian thinkers have interpreted the rise of their religion as a sign of Jesus’ divine nature. Among the many prophets teaching at the time, why should he alone have inspired a religion that spread to the last corner of the earth? Unless you think that human events unfold under some sort of divine guidance, the metamorphosis of Jesus’ teaching into a universal faith can only have been the result of a succession of accidents. … The Christian religion is a creation of chance.”

“A free-thinking atheism would begin by questioning its prevailing faith in humanity. But there is little prospect of contemporary atheists giving up their reverence for this phantom. Without the faith that they stand at the head of an advancing species, they could hardly go on. Only by immersing themselves in such nonsense can they make sense of their lives. Without it, they face panic and despair.”