“Wendy and Lucy,” from 2009, is an unsung pearl of stripped-down indie filmmaking. Directed by Kelly Reichardt, it warrants a revisit by dint of its thematic relevance, stirring lead performance, and the soulful presence of an utterly endearing dog named Lucy. My review:

In the minimalist heartbreaker “Wendy and Lucy,” Michelle Williams plays Wendy with a premature perma-frown and a youthful spirit that’s been crumpled like a recycled can. Lucy is her faithful pup, a golden mutt with dark, serious eyes and the cool composure of Robert Mitchum.

She’s a good dog. Wendy’s striving to be good, too, but fate and circumstance have thrown up a gauntlet of bad luck with no room in which to budge. With impressive calm and fierce nonjudgment, the movie puts you in Wendy’s shabby sneakers and taps into our morbid economic moment when it can seem that a dog is all you have. 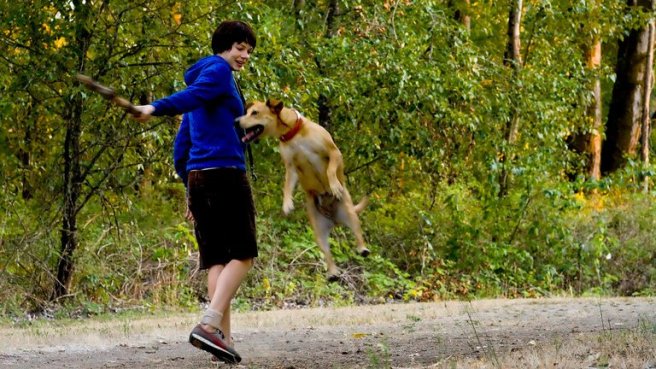 Kelly Reichardt’s follow-up to her scruffily lo-fi “Old Joy” is a desolate story told in miniature with almost forbidding quietude. It crackles on life’s lowest, most natural frequencies, banishing slash-cuts and musical cues, except for the singsongy, slightly eerie tune Wendy sometimes hums, and courts the rustle and flow of its woodsy Oregon setting. Such a threadbare aesthetic speaks of self-conscious formalism, yet form and function here are gracefully and expressively wed.

The story, what little there is, starts in mid-sentence, with Wendy and her steady companion stopping in a small Oregon town on their way to Alaska, where Wendy plans to get work in a cannery. “I hear they need people,” she tells an old parking lot security guard (an extremely un-actorly Walter Dalton) who becomes her angel in hard times.

Wendy has an exhausted voice for her age. It’s breathy and weary and assumes a pitch of exasperated despair as her troubles mount. Her car breaks down, she gets caught shoplifting dog food and, topping things off and setting the nonplot in motion, Lucy disappears.

Wendy searches for Lucy and, with no money, tries to get her car fixed. That’s it. But of course that’s not it. The movie’s a symposium in American poverty, about how people living on the brink of destitution can land there with a shift in the wind. It’s about how people respond to a woman whose only problem seems to be chronic bad breaks. It’s about how you and I respond to that dude and his dog with a cardboard sign at the intersection — our fellow citizens and brethren. Wendy becomes different things to different people: parasite, criminal, an everywoman in need. It’s about our state of affairs, right now. 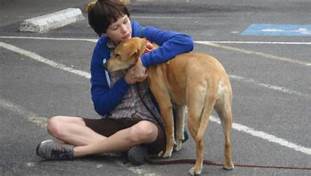 Reichardt and co-writer Jon Raymond, who displayed a similar fascination with the dispossessed and marginalized in “Old Joy,” purposely strip Wendy of backstory and even much personality, and this could challenge viewer empathy. Williams, sporting cut-offs, a tomboy shag and vacant eyes, recedes into the role, making Wendy a wraith in society, all but invisible. It’s an entrancing anti-performance.

You could say nothing happens in “Wendy and Lucy,” but if it were your life, everything happens. The movie doesn’t make it easy on pleasure-seeking viewers. It proudly basks in the quotidian now and lives in its exquisite details, be it Wendy washing and changing in a dingy gas station bathroom or walking past graffiti that simply says “Goner.”

In its stubborn airiness “Wendy and Lucy” grants you gaping spaces in which to wander with the protagonist and feel her metastasizing despair. Without melodrama or the clanking machinery of by-committee plotting, the movie engenders a sense of effortlessness that snares you in its lyrical spell.

It’s tempting to call this frowzy story a tone poem, but it’s not. It’s cold, naked prose, scratched in gravel with a stick.