My Russian visa finally arrived after an intensive, grueling process that cost half as much as my flight to St. Petersburg. It shouldn’t be so difficult, so discouraging — do they actually want visitors, you begin to wonder.

In Turkey you go to a counter first thing off the plane and buy a $20 visa sticker for your passport and you’re done. It takes 15 minutes. Syria was a bit more involved: I had to send about $100 with my passport to the nearest consulate, they stamped it and sent it back. (There was more to it than that, in my case. I had to get a whole new passport because mine had an Israel stamp, a no-no with Syria.)

But enough with the pesky visa. The minor ordeal is over, let’s hope, despite the irretrievable hideousness of my visa photo, in which I look like a low-grade Russian street gangster. I can’t get over it. The customs inspectors will probably block my entry and send me home.

On to the next level of travel planning — what book to bring for leisure reading in the airport, on the plane and wherever else down time must be occupied. This is serious. A few times I’ve taken the “wrong” book on trips only to realize at page 30 that I don’t like it and I’m then screwed until I find an English-language bookstore at my destination. (“Moby-Dick” and Malcolm Lowry’s “Under the Volcano” were two of those.) A book I bought in the Amsterdam airport was Ian McEwan’s brilliant “Enduring Love” — a blind score after I purposely left the book I’d brought on the plane.

Now, instead of risking disappointment on an untested title, I stick to classics and favorites. Rather recently I brought “Franny and Zooey” to Paris, “Catcher in the Rye” to Spain (yes, a little Salinger kick), “Stoner” to California and so on. For Russia I’ve picked a novel by a Russian titan which ranks in my top two or three favorite novels of all time: “Lolita” by Nabokov. One, there’s the Russia tie, even though he wrote the America-set book in English. Then there’s the fact that it’s a known quantity of peerless quality. I’ve read it twice, and now is the perfect moment to revisit. (As queasy as I can get about the subject matter, Nabokov’s extravagant prose, so transcendent religions could be founded on it, eclipses moral squirming.)

I also assign pre-reading — homework — for my journeys. Besides the sights and practicalities of guide books, I peek and poke through histories, ransack the web and watch as many documentaries on culture and history I can find. That means a lot about the Czars, Lenin and Stalin for this vacation. Today I picked up — more like lugged — David Remnick’s Pulitzer-winning doorstop “Lenin’s Tomb: The Last Days of the Soviet Empire.” It’s thick, it’s heavy and, so far, bloody and gripping. 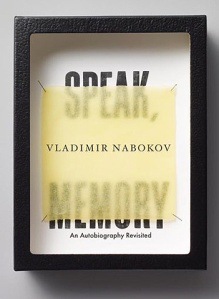 And my planned visit to the free Nabokov House Museum, the author’s home from his birth in 1899 to 1917, necessitated grabbing Nabokov’s celebrated autobiography “Speak, Memory,” which I read many years ago. Much of the book is set in the house, a repository of writerly ephemera, artifacts, decor, desks and his beloved butterflies.

This Nabokov jag dovetails nicely with my St. Petersburg trip. I will read part, maybe all, of the autobiography, leaving me with “Lolita” to crack in the airport in a few weeks. Meantime, I have the Remnick opus, “Lenin’s Tomb,” to hold me over, all 12 pounds of it. Reading’s a huge part of travel, I think, and I wouldn’t have it any other way. It’s informative, transformative, and it propels you just a little bit further on your voyage with words, wit and wisdom. It enriches, expands, excites. It’s like its own whopping journey.