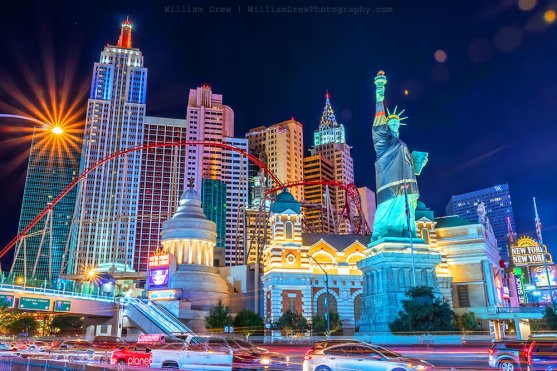 The Las Vegas trip I wrote about many weeks ago is fast approaching, and I have so many qualms about it — still — that I often refer to it as “madly misbegotten” or “crazy-stupid” or “a dangerously prolonged snap of full-fledged insanity.”

I wonder: What am I doing? Here’s what I’m doing: I’m trying Vegas on for size after a lame visit 20 years ago, when I was as green as a gecko, this time for two days and three nights, tiptoeing out of my comfort zone of Big City Cosmopolitanism (Barcelona, Tokyo, etc.) and making the plunge into trash, cash and neon splash.

I’m going to the atomic-bomb-blasted Mojave Desert for some improbably fine dining, appalled and mouth-agape strolls through Disneyesque fake-scapes that perversely mimic Manhattan, Venice, Paris and Egypt, and possibly plopping coins into some one-arm bandits (I even know the lingo!), if they still exist. I hear coin slots are nearly obsolete in favor of tawdry video slots. But what do I know?

Not much. I picture myself getting up latish, say 9 a.m., and wondering what in the hell one does in Las Vegas at that hour, besides shake off the previous night’s debauchery. Breakfast/brunch buffets and gambling are what I’ve gathered. I don’t do either. Most of those bargain buffets are gruesome, Greco-Roman barf-fests and serious gambling’s for dolts and the delusional, so then what? I’m lost.

But not quite. To while away an hour or two there’s the curious National Atomic Testing Museum, which sounds about as festive as the Paris sewer tour I once took, without the fetid funk. I expect the grim and the grimy, hairy history and some shock (America did what?) and awe (kablooey!). HazMat suits preferably required.

More radioactive, hence something I surely won’t be doing, is the overrated-seeming Neon Museum, which currently is semi-colonized by electric signage designed by movie director, artist and Tiny Tim wannabe Tim Burton, whose films — “Edward Scissorhands” to “Charlie and the Chocolate Factory”; “Sleepy Hollow” to “Dumbo” — give me spontaneous cavities and slashing migraines.

Entry is normally $22 to walk about the corpses of old Vegas signage, but because there are emblems from Burton films the price is $30 and I’m not paying one extra dollar to see anything by Burton, kiddie clown and gothic goblin of make-believe, eyeliner ghouls and big-eyed bugaboos. (OK, I kinda liked “Beetlejuice.”)

For true titillation, I’m eyeballing at least two thrill rides, something Vegas, knowing its lack of sticky attractions, has stuffed itself with. The Big Apple Coaster at the ridiculous New York-New York Hotel barrels around a towering simulacrum of Manhattan, Statue of Liberty and all, with hair-blowing, cheek-fluttering views of the Strip and a pygmy Empire State Building.

Atop the landmark Stratosphere tower is the delectably named Insanity, described as a “ride that dangles you 866 feet in the air and spins you around, all while forcing you to stare at the ground. A massive mechanical arm extends 64 feet from the edge of the Stratosphere, and spins you at speeds of up to 65 mph.” As near to heaven as one can get.

Night falls. Instead of Vegas’ dazzling yet pocket-wringing Cirque de Soleil extravaganzas — I’ve seen a few in my day, all blaze and wonder — I’m opting for the famed Comedy Cellar which, I’m certain, will be a jamboree of mediocrity. (Discount tickets help.) There’s a lot of bad comedy out there. As the adage goes, dying is easy; comedy is hard. I have a feeling I’ll witness mostly the easy part. But that’s some of the fun of live comedy, he said wistfully.

Onto food. Here’s what I’ve lined up, dinner-wise:

— Lotus of Siam — Regarded by some as the best Thai food in America, this cozy hotspot is also a bucket list destination. (I don’t have a bucket list, but I’m adding this to it.) Recommended are moo dad deaw (Thai-style pork jerky), a deep-fried marinated spicy pork appetizer, and khao soi, crispy duck on a bed of egg noodles in curry, with lime and pickled vegetables. I’m getting both.

That sounds like a lot of fun, actually. But face it, Vegas is really one elaborate rip-off, a con job, a losing proposition, a fool’s game, especially if you gamble. Even those thrill rides I mentioned: they’re $15 and $29 a spin. I just looked that up and I’m currently making new plans. I hope there’s a merry-go-round nearby.

“Crashing all your hopes down the drain”? Coming from the King, I don’t know if I should laugh or cry. What I do know is care must be taken. I believe the slogan: What happens in Vegas, stays in Vegas.

Which I take to mean, my money is filched in Vegas.

And my money stays in Vegas.