As one who seeks out the freaky and far out in my travels, serendipity seems to be the best GPS for the fiendishly, often funnily, strange. Mostly this is in the form of art, mainly sculpture and statue and the occasional painting. (Or some decidedly unfunny human cremations in India and Nepal — I’ll spare you.)

Sure, it’s superficial this fascination. (So weird! So hilarious!) What does it mean? Not much. It’s aesthetics of the outré, stimuli out of left field, tailored, perhaps, to the oddballs among us. It’s striking, warped and wonderful. The more ghastly the better. The more shocking the cooler. (Note: I have yet to stumble upon art or artifact that’s sincerely blasted my senses. It’s out there, and I will find it.)

Here, meanwhile, are irresistible curiosities I’ve come across around the world:

Today, in the first week of August, my niece was rattling off why fall is her favorite season and she slipped into this refrain:

I almost applauded. Fall is my favorite season, too (winter’s a close second, or maybe they’re tied). I can’t do summer. I don’t do summer. August is the cruelest month — it spews volcanic heat, it seems to last an eternity — but when it arrives I count the days of summer’s final steamy breaths. September is around the bend. It won’t be long till I can slip on a jacket. The anticipation’s killing me.

In summer the heat’s too murderous, the days are too long and the pants too short. We know this. But some of us actually like this. Everyone chirps about how nice it is outside at a torrid 88 degrees. They start eating outdoors, drinking beer in blazing sunlight. I’m vampiric. There are outdoorsy people, then there’s me. I’m indoorsy. “Sun and fun” don’t compute. (One word: barbecues.) Like a possum, I’m a nocturnal creature. I crave the dark. Now, where’s the AC?

No one likes humidity, but that’s one of the joyous gifts of summertime. I have pretty curly hair that swells and swirls in the humid soup, until it shares attributes with the protagonist in “Eraserhead.” Humidity is the devil’s flatulence.

I’d rather shiver than sweat. I lived for years in Texas, where summer lasts 10 months out of the year and sweating is a way of life. It’s one of those places where when you sit outside at a bar you get soaked by misters. Sweat and mist. Bring a towel, slicker and umbrella.

I travel a lot but never during the summer — the rigged prices, the crowds, the heat exacerbated by global warming. (Those scourging heat waves in, of all places, London and Paris are a scandal.) Tropical “paradises” are off the table, though I hold dear my spring and fall trips to Vietnam, Thailand, Hong Kong and India, epicenters of perspiration. I was positively soaked-through the whole time during all of them. From India I flew to Nepal just to cool off near the Himalayas and breathe relatively fresher mountain air. In Thailand, I got sun poisoning. That’s a long, humiliating story, featuring one beach, eight hours and zero sunscreen. (The upshot: I could barely move my swollen legs and I had to drink two gallons of water a day.) 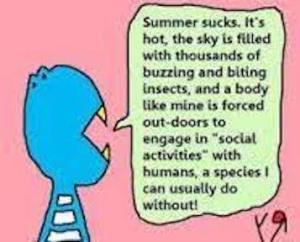 What about blameless spring, with its temperate climes and floral efflorescence? Careful, spring can get you too. That’s why it’s my second least favorite season, with all of its pesky augurs of summer: rising temperatures, plants and pollen, picnics, longer days, and, of course, those bugs, bugs, bugs.

Summer’s dragon’s fire will soon be extinguished by the crisp gusts of autumn. Turning leaves, shorter days, harvest moons, soup, fall TV, Halloween. Halloween is a big one. It’s way up there on my niece’s list of fall glories. (Since I travel so much in autumn, I’ve done Halloween in London, Paris, Beirut, Ho Chi Minh City, Kathmandu and Sevilla. Each city bumbles the American holiday. For now, it’s strictly amateur hour.)

And yet there are six calendar weeks left of the warm stuff, so maybe I’m getting ahead of myself. But I don’t think so. August is the last hurrah, the season’s dying gasp, and it’s here and, with sunglasses tucked away, we are ticking off the days, closely, carefully, ecstatically.