On a recent hot Monday, I bought a big bottle of Dewar’s White Label Scotch. The home supply was running low. It was dire.

I tapped the Lyft app for a ride and soon enough the usual dark, Japanese-made sedan pulled up. The driver was a late-middle-aged guy, tan with a ball cap and a festive tropical shirt from the Jimmy Buffett line. I climbed in back and set the heavy bottle on the floor. It made a gurgly thunk.

We drove in becalmed silence.

As I opened the door to get out, the driver turned and said, “What do you have there?” I hoisted the bottle so he could see the label. He frowned, then he took the bottle and read the label more closely as if he couldn’t believe his eyes.

“You’re right, that is the good stuff. I save that for special occasions.”

“Special occasions? I only drink Glenlivet,” he grumbled. “Stopped drinking Dewar’s years ago.”

“Or there’s Laphroaig,” I said, trying to sound whisky-literate, refined, like I clearly knew Dewar’s was rotgut.

“This isn’t even Scotch,” he said, grimacing. “It’s blended, not single malt.”

I told him I knew that it was blended and hinted that with this 1.75 liter bottle, I was getting more bang for my buck. That didn’t go over well with the purist. He scowled.

I wanted to read him the encouraging Dewar’s description: “Up to 40 of the finest malt and grain whiskies are blended together in perfect harmony … Notes of Scottish heather and honey linger on the finish, with the faintest touch of smoke.”

But surely it would sound to him like a paper-sack-sipper’s doggerel. This was outstanding. My Lyft driver was a whisky snob. I suddenly wanted to engage him in dialectics about beer — does he wrinkle his nose at IPAs as I do? — cocktails — would he ever drink one with cucumbers floating in it? — and wine — is vino in a box tantamount to ramen in a styrofoam cup?

I wondered about his life — what kind of music he listened to, if he bet on the horses, does he watch “America’s Got Talent.” Lyft and Uber drivers are fascinating. I talk to most of them, a lot about where they come from. I always tell Jamaican drivers that I visited Jamaica twice as a teenager. A lively gabfest, full of lush places and vivid anecdotes, invariably follows.

The ride sharing phenomenon is patently different from the standard taxi pickup. Lyft and Uber drivers pilot their own personal vehicles, so you never know what you’re going to get. Mostly you get mid-range four-doors — Toyotas, Hondas, Kias, Nissans, the occasional American model — and minivans with maw-like sliding doors. Only once did I get a truck, this towering Chevy beast. The driver told me that all his fares remark upon its hulking exoticism. 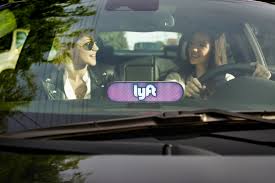 Because there are no physical taxi-like barriers between driver and passenger, the situation is literally open, which makes it socially conducive. We talk. We pry. We joke and laugh. We gripe about the weather and bad drivers. (It’s no “Taxicab Confessions.”) I always inquire about whatever keychain, tassel, necklace or other tchotchke is swinging from the rearview mirror. Stories abound. A sliver of a life resides in that little dangling dreamcatcher.

I try to compliment the driver’s choice of vehicle, especially if it’s extra nice or extra clean. And, with queer frequency, I tell them how pleasant their car smells, because, boy, they are besotted with nose-tickling air fresheners.

It’s a human thing, and the encounters, spanning many cities, are kaleidoscopic. The garrulous, too-much-information pot dealer; the beaming student who has by chance picked me up a few times and now calls me Mr. Chris; the yoga-psychic who insisted I write down my number so she could get my business; the Paris drivers who talked jazz and Trump and practiced their English; and the countless immigrants — so many Haitians! — from Boston to London, whose stories of their former homes and their new home are wondrous and heartening.

Expansive chatting was not to be on this ride. My Lyft driver was a taciturn man. Strictly Scotch. Strictly my Scotch.

As I left I took my bottle and I thanked him with sincerity for the lift. (I went on to award him a five-star rating.) Kindly, he thanked me back.

“Enjoy your drink,” he said. “You’re going to get a hangover.”