A few years ago, I did something harebrained: I joined Facebook.

Mere hours later, I quit the network, deleting my profile in its gurgling infancy. I joined right around midnight. I hit delete early the next morning. I did so with a massive sigh of relief: What was I thinking?

What was I thinking?

I was thinking, gee, maybe, as all my friends tell me, I’m missing out on some electronic fun, unfettered 24-hour socializing, photo and content sharing. I could post my marvelous travel pictures. I could see what long-lost pals are up to. I could crow about my fabulous life, crack wise and click the “like” icon with fulsome abandon. I was feeling adventurous.

Before, none of that had sounded attractive in the least. For some reason, in a momentary lapse of sanity (was it the pinot noir?), it did. And then it didn’t again. Cue the cold sweat the next morning. Cue the get me the hell off this thing panic.

During my rash registration I invited several friends to “friend” me, or whatever it is one does to connect on Facebook. By the morning I had a small tribe of friends, cyber-pals, some of whom, to my horror, had posted pictures of me on my page. I felt exposed and mortified. My instincts were spot-on: Facebook wasn’t my bag.

It’s all about sharing, and I’m not a big sharer. I don’t really want oodles of people to know what I’m up to. I certainly don’t want to see someone’s family photos snapped at Disneyland. I also don’t want to hear about so-and-so’s chronic illness. And that endless stream of (totally unreliable) information trickling down the page smacks of so much irksome spam.

Facebook and its ilk, from Twitter to Instagram, I think, are for people who like to share, show and showoff. They must be connected to feel alive, validated. There’s a boastful, presumptuous strain at work. Obsessively scanning their phones, staring in a locked zombie state, I see inborn extroverts, the gabbers, those tautly comfortable in their skins, the socially amenable and acutely people-ly. I see the FOMO syndrome. I see neediness.

What is this blog if not a way to connect? you might ask. It’s really just a billboard on which to write stuff. It’s far from a network. Any connections are stubbornly vague and mostly through distant “likes” and the rare comment. It’s written largely behind a scrim of anonymity. My last name is nowhere to be found and, save for the picture of me as a kid on the “About” page, there are no photos of me. I can be irrationally shy. 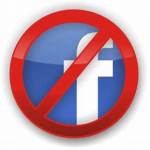 Facebook is even less alluring amid current reports of vast security breaches plaguing the network. The data and privacy of 50 million Facebook users have been compromised, prompting a social media backlash, a call to #DeleteFacebook. People from all walks (even Cher!) are deleting their profiles with great, groaning exertion, extracting themselves from what is arguably an addiction for many. (Unfortunately, some Facebook accounts represent charities and small businesses that can’t afford to nix their profiles.)

Party-pooper, anti-social, misanthrope, grandpa-grumpus — call me what you will. I connect in my own ways — email, texts and calls: perfectly efficient — without waving my arms in the air to get attention and unloading my life on fellow Facebookers. I share things on this blog, of course — it sometimes reads like a journal — but reading an entry is not a social transaction. It’s smaller than that.

We’re told to live out loud. Some of us prefer to turn it down a notch. Not to put it on mute — where’s the fun in that? — but at a setting more like a conversational nudge, not a bullhorn.