Why is everyone so down on Sea-Monkeys? People scoff when I bring them up, which is pretty much never, and the novelty item’s star ratings are piddling to pathetic at Amazon. (2.7 stars? Wha?)

Sea-Monkeys rule. If you’re 7. But really, I’ve owned them at least 10 times as a kid (and, all right, as an adult), those trippy, creepy, itsy-bitsy, dimly disappointing crustaceans that swirl around a small plastic tank on your nightstand before dying off, one by one, until all that’s left is greenish, brackish water that smells like the devil’s bing-hole. My freakish, fun-loving, easily-fooled brain adores them. 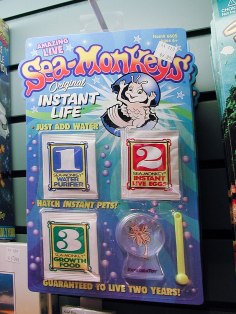 They come up because I recently watched Penny Lane’s 2016 short film “Just Add Water: The Story of the Amazing Live Sea-Monkeys.” (See all 16 mind-tweaking minutes of it here.)

It jogged a zillion memories of my 9-year-old self hatching what are actually microscopic brine shrimp (which are used primarily as fish food), hoping, always hoping, for the anthropomorphic little families of so-called Sea-Monkeys to appear when I followed the directions to concoct a peculiar potion.

The famous advertisements in comic books of the 1960s-‘70s depicted happy, three-pronged-crowned sea creatures, naked part-fish/part-people, hanging out, smiling, doing their whateva Sea-Monkey thang. And it showed human purchasers gazing at a bowl of them, grinning like fools. It was wonderful. And for a kid who thought Bigfoot and the Elephant Man were the dope, implacably seductive.

So you order the Sea-Monkeys. Miniature plastic tank that you fill with tap water — check. Then add Packet #1, the water purifier, which, according to the short film, actually contains the Monkey eggs, “giving the Sea-Monkeys time to get big enough for you to see them” in a 24-hour period. Packet #2 is really blue dye that makes the day-old Monkeys even easier to observe. (There’s a small racket going on here.) The other packet, #3, is Growth Food. It smells like algae and fish guts.

No matter, what is happening is science. Namely, “cryptobiosis,” or instant life, meaning the Sea-Monkey eggs are dehydrated like NASA space food and pop to life with the addition of water. Think Cup O’Noodles or Taster’s Choice instant coffee, but with tiny monkeys. That aren’t actually monkeys.

Brine shrimp are what they are. At best, they grow about a half-inch long. They have spindly, monkey-like tails as adults and they swim with fluttering angel’s wings, flapping in circles around the tank, nose-diving, eating food at the bottom and, most curiously, latching onto one another in possible monkey coitus. Baby Sea-Monkeys do happen.

I’ve had a Sea-Monkey live about a year or more — a personal record. It was massive. When it died, my college dorm-mate and I burned it in a funeral pyre. I wish I was joking.

Sea-Monkeys are a conflation of toy and pet, two of children’s favorite things. They are the brainchild of late eccentric inventor Harold von Braunhut, who created a “stage show, the illusion of instant life,” says the film.

But the movie also reveals pure evil: Von Braunhut was an active and outspoken member of a major pro-Hitler white supremacist league. How to reconcile these two sides, the whimsical and the wicked?

“It’s the great mystery lurking behind the Sea-Monkey castle,” says Richard Pell of The Center for PostNatural History in the film. “How does the guy who invents all of these wonderful, playful fun things also promote such horrible ideas?”

I shake my head vigorously. I can’t answer this question. Some might even think Sea-Monkeys, those mutant, sci-fi creatures, are horrible ideas. Spawns of satan.

I then recall my own evil, sheer monkeyshines. As a kid, when I got bored with my tank-circling Sea-Monkeys, I once fed them to a trio of mail-order sea horses (who themselves croaked after about three days). Another time, I poured them into one of those hand-held water games of hoops or tic-tac-toe and swished them around like debris in a storm. Sea-Monkey sadist.

And yet here I am, decades onward, seriously considering buying for my birthday a Sea-Monkeys Ocean-Zoo for $12.98 from Amazon. I am so tempted I can hardly stand it.

(For the Sea-Monkey completist — who isn’t? —  visit the official Sea-Monkey site here.)

7 thoughts on “Monkeys Sea, monkeys do”