The last time I was at SeaWorld in San Diego, epochs ago, an elephantine walrus sprayed a vast and violent spume of water at my mom, soaking her in spit and salt water and leaving me half aghast, half in giggles. It was a splashy public display — a decent crowd circled the creature’s enclosure — and mom was not overjoyed. Harpoons danced in her head.

This was the revenge of the pinniped, a blubbery brown Jabba the Hutt that seemed to be broadcasting to us all, “Stop taunting, gawking and pointing at me and my helplessly oppressed prison mates. Enough! Sploosh.” 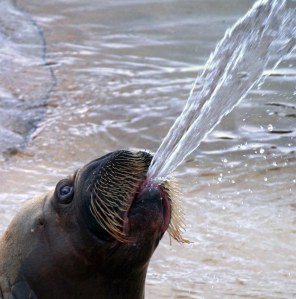 If only all the park’s captive marine animals — penguins, dolphins, seals, sea otters, orcas, sharks, florescent fishies — could speak so eloquently, so mean and to the point. Because these swimming, jumping, barking, glowing creatures are not happy campers. They are abductees, held against their natures, highly evolved wildlife reduced to playthings, ogled objects, effectively slaves. They should hold a hunger strike, or incite a riot, or at least sign petitions.

I’m returning to SeaWorld this month with a hard gulp of guilt. First, there’s the raping of my wallet: the standard entry fee is a leap-off-a-bridge $92. Surely at that price I can ride a killer whale and feed a Great White and take home a baby otter. (But, uh-uh, I can’t.)

But more importantly I am guilty about all those animals, many of which have heartrending backstories. It mostly plays like this: The animals are snatched from their mothers on the open sea and dropped into a tiny, concrete, chemical-laden pool for a torturous eternity of crowd-pleasing antics, frozen fish food, disease and premature death. Did I note that the mothers from which they are snatched are often slaughtered? There’s that. 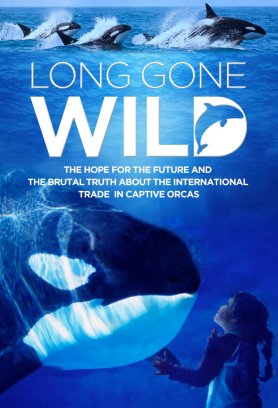 Despite meager improvements — SeaWorld, under tremendous public pressure, ceased its orca shows in 2017 — the new documentary “Long Gone Wild” reveals a “wildlife trade that includes capturing orcas from the wild and selling them to the exploding marine theme park industry in China, and points to the hardships orcas experience in captivity, such as collapsed fins, broken teeth, and severe boredom and depression.”

I have little doubt the remaining killer whales at SeaWorld are borderline suicidal.

And why did SeaWorld San Diego halt its theatrical killer whale shows? It’s thanks in large part to powerful agitprop, particularly the 2013 documentary “Blackfish,” which follows a performing killer whale’s cruel treatment in captivity and its resulting swath of destruction, killing several people while in captivity.

(As for swimming with dolphins, that exotic brand of blissful exploitation: also reprehensible. See HERE and HERE.)

So off to SeaWorld I go (it’s a family thing). I can bring money, I can bring empathy and sympathy and an overall spirit of goodwill. I can look a dolphin in the eye and whisper, “Dude, hang in there. You can do this.” I can tell a walrus to chill and enjoy his prison comrades, before he loogies in my face and tells me to go to hell.

I can’t free Willy, but I can instill in him and his sea-park pals dignity and self-worth. It won’t be easy — those flapping, clapping sea lions look thrilled to be there, despite yelping like they’re being run over by a Range Rover. Yet with rectitude, altruism and a soupçon of soul, the animals might know we’re out there, and that we give a damn. 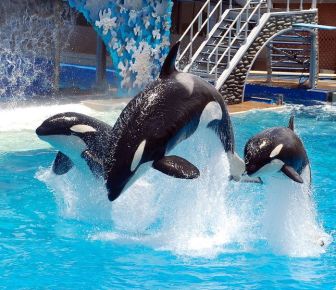