I’m pretty sure Cubby the dog doesn’t believe in many things — God, playing dead for treats, how wonderful I am — though I’m convinced he believes in some things. Like meatballs and bully sticks and tummy massages and bedtime snuggles and brisk walks and peeing on the rug. He’s a good dog. And like most good dogs, he’s ridiculous. Neurotic, but nourishing.

Rescued from a shelter, Cubby has, in the past year or so, learned how to act like a tried-and-true doggy, a small, curly-haired mutt with a pleading gaze and a tail that swoops up and over into a large Spaghetti-O.

He now knows how to worry a bone, chomp stuffed toys, play tug of war with said toys, scurry after the bone when it’s tossed then make you chase him around in a game of try and get it, sucker. All this is heartening. He’s maturing. He’s getting sillier.

But I think he’s deeper than all that stock dog stuff. Cubby is a wise old soul, beyond his four or five years, attuned to his lot in life, his place on the totem pole of existence, and, with a melancholy tinge, his impermanence.

This struck me last summer, detailed in this blog post, where I observed:

“The dog seeks the meaning of life, this is plain from his searching brown eyes, furrowed brows and the alarming way he wipes his butt across the carpet. Freud’s pleasure principle manifests itself in his frequent calls for belly rubs. Sartre’s existentialist theory, which states that our individual responsibility in defining our own lives is almost debilitating in its enormity, has the dog a little down. Knowledge of his own mortality is something of a buzz kill.”

Cubby may be a Buddhist. He is mindful and meditative, his solace arriving many hours each day. (Some call these naps; I call them rumination, deep cogitation, mini comas.) He is a passive soul. Barking he does sparingly, almost exclusively when the mail comes, then he claws the paint off the front door and cries like an aggrieved banshee. It is the yelp of an injured Indian spirit, whose dead have been gravely molested. Then he shuts down, curls up, and ponders the teachings of Siddhartha and the joys of a good tennis ball.

We wonder. What does this animal believe in? Tasty bones, yes. Death, alas. A vigorous rub behind the ears, certainly. Bacon Beggin’ Strips, no doubt.

Yet the question resounds: Can animals really believe?

Cats — pshaw; they believe in their own supercilious godliness. Forest dwellers — a humble group deeply in accord with nature’s bylaws, true believers. African wildlife — a hot mess, as seen on “Planet Earth,” strictly heathens and satanists that believe in ritualistic bloodletting and organized torture on the Serengeti.

None of that for Cubby. He’s a fuzzy little wiseman. He should be wearing beads and vestments and lighting incense. He is a philosophical creature; don’t let his crazed, leg-scratching greetings fool you. When you gaze into his small eyes, worlds are revealed. One’s heart softens and the soul cracks open. He is telling you something, and not just “Get the leash, I gotta poop.”

Was it Nietzsche who said “The better I get to know men, the more I find myself loving dogs”? Or was it Harpo Marx? No matter. This is an inversion of the master/slave equation, wherein the master (you) succumbs to the overpowering ardor and joy provided by the slave (doggy). That is this dog’s wisdom. He has our number. And he calls frequently. Collect.

Cubby’s beliefs are better than his bite. In his canine universe, he is disciplined, devout, enlightened. He has found meaning and purpose. The dog is, indeed, dogmatic, a mutt with a mind. And, uh, yes, that’s him over there, avidly licking his genitals. 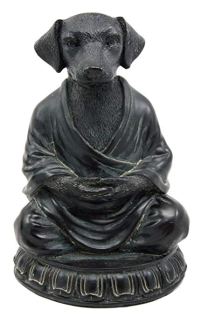 2 thoughts on “Dogma of the dog”