When am I not thinking about the Elephant Man?

I’m not just talking about the shattering 1980 film by David Lynch (still one of my favorite movies — see my appreciation here). I also mean the actual, real-life Elephant Man, née Joseph Merrick, the hideously deformed young Brit who, with considerable luck and one doctor’s wayward compassion, went from the squalid, dehumanizing freak show circuit to become the toast of Victorian London before he died at age 28 in 1890.

Merrick has been on my mind since I was yay high. Call it odd, perverse or, well, freakish, but the creepy and offbeat have clutched me in their thrall since my youthful exposure to Universal Horror flicks, campfire myths like Bigfoot and the Moth Man, and the most enduring gift I received on my eighth birthday, the thick book “Very Special People: The Struggles, Loves, and Triumphs of Human Oddities” by Frederick Drimmer.

In the book, among the likes of Jo Jo the Dog-Faced Boy; Grace McDaniels the Mule-Faced Woman; the original Siamese twins; and Julia Pastrana, aka the Ugliest Woman in the World, was Merrick, perhaps the saddest story of them all. (Although Pastrana’s story is heartrending, bizarrely grotesque, and worth a look here.)

A speedy summary: In an unorthodox gesture of charity, Dr. Frederick Treves took in the incurable Merrick, who suffered from severe neurofibromatosis, at the Royal London Hospital, furnishing the sick, lost and abused sideshow veteran a dazzling new life of comfort, friends, celebrity visitors, room and board and more. Though his appearance still terrified the faint of heart, Merrick was embraced by mainstream society until his premature death. 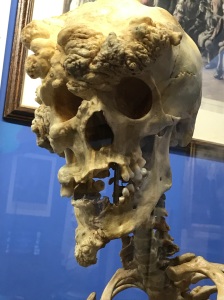 (Merrick’s skeleton resides at the old Royal London Hospital, and a few years ago I visited hoping to see the bones. I was rebuffed, but I had the pleasure of the hospital’s special museum dedicated to Merrick’s life.)

I know a lot about “The Terrible Elephant Man,” as he was billed on the road, not only from “Very Special People” and Lynch’s ravishing biopic, but from a slim paperback I bought in seventh grade, “The True History of the Elephant Man,” about which I wrote and presented a book report to my befuddled English class.

What gets me about Merrick is his life story, one so rippled with tragedy and depravity, it curdles the soul as it breaks the heart. Living in a sooty black-and-white London of clanking, steaming machinery that ushered in the Industrial Revolution, Merrick’s old-timey milieu also enthralls (see the Lynch movie for a rattling immersion in time and place), and seems of a piece with his destitute, Dickensian plight.

My fascination has become rather fanboy. (Elephant Man cosplay — I will have to pass.) Besides books about Merrick — including “Making ‘The Elephant Man’” by one of the film’s producers, which I just bought — I own the American, Turkish and Japanese posters of Lynch’s movie, as well as a coffee mug embossed with a period photo of Merrick looking dapper in a three-piece suit.

Around the time I got the making-of book, I ordered what I’ve wanted for a long time, a t-shirt of the “Elephant Man” movie. This one is a silkscreen of the film’s Japanese poster art, fusing my passion for all things Japanese with my strange Merrick mania.

A tad zealous, perhaps. But consider that Michael Jackson famously tried to buy Merrick’s bones. He was flatly refused. I once thought that Jackson was overreaching, being the creepy eccentric he was.

Nowadays, not so much.

2 thoughts on “My freakish fixation”