Once I was strolling down the sidewalk in a small leafy city when I almost stepped on a dead baby bird. Gruesome and heartbreaking, about the size of a toddler’s palm, the chick bore hues of hot pink and bruised blue. Its livid, bulging eyelids were sealed, its featherless body as smooth as a plum. It was impressively intact.

After a flush of shock and pity, I did what any sane person would do. I wrapped the freshly hatched corpse in a handkerchief, stuck it in my pocket, and took it home.

I knew exactly what to do with the sad songbird that would never sing. I took a small, squat jar and dropped the creature in. Then I filled the jar with rubbing alcohol as a cheap formaldehyde substitute to preserve the bird. It looked like the baby floating in space at the end of “2001.”

“You’re nuts,” a friend said, grimacing at my latest specimen.

“If by nuts you mean genius, then you are correct, amigo,” I replied.

Those were the days when I maintained a kind of ghoulish cabinet of curiosities, an array of animal bits and pieces that you might see in a really good, icky museum, like the Mütter in Philadelphia or the Kunstkamera in St. Petersburg, Russia.

A minor collector of the morbid and marvelous, I was proud of my little spread on the mantel. It featured a perfect gopher skull I found in a forest that I boiled to get it ivory white; a shark jaw bought in Tijuana; a desiccated sea horse; an artfully mounted dried piranha; a skinny, three-inch coyote penis bone picked up at the wondrous Evolution Store in Manhattan; and, of course, the pièce de résistance, the newly jarred baby bird.

All I needed were the famous bones of the Elephant Man to make my mini-museum world-class. Instead I had a penis bone. Of a coyote.

My interest in this kind of fleshly ephemera goes back to when as kids we hunted lizards and snakes, captured frogs, tadpoles and the occasional crawfish. At the beach, we collected sand crabs, starfish and washed-up egg sacks from sharks.

It wasn’t callow mischief guiding us, but a dogged fascination with the slimy, squirmy world, our first real engagement with the natural sciences and coexistent creatures. Back then our main educational outlet for these things was TV’s “Wild Kingdom,” a show that pales woefully next to today’s über-slick “Planet Earth.” Yet it was good, eye-opening.

Even now, none of this bores me. Though I’ve since discarded my assortment of animal oddities, I love roaming the aisles and perusing the glass cases at the Mütter and the Evolution Store, gaping at furry and scaly taxidermy, jarred sharks, pickled human organs, and skulls of all species.

Meanwhile, my birthday is coming up. Here’s what you can get me, from Evolution:

Jaws in a jar. Beat that.

As promised I made it to the Kunstkamera Museum in St. Petersburg, Russia, last week. Also known as the Peter the Great Museum of Anthropology and Ethnography — the oldest museum in Russian, opened in 1727 — it’s also known to connoisseurs of the grisly and gross as the Great Hall of Deformed Human Fetuses in Jars (not really). It’s a delight.

And yet there aren’t as many specimens as I was hoping for, nor was there much in the way of the truly macabre. A few tweaked human skeletons — that fella’s really gigantic — a two-headed stuffed fox and some rusty surgical tools complemented the array of squishy, floating babies. Those twisted wee ones delivered the goods, a frisson of the freakish that some of us crave.

I was expecting more in the way of anatomical and medical exhibits, but the museum is largely dopey ethnographical artifacts — Native American beads and pottery, African huts, Eskimo furs, in tiny dioramas — you can see at your local natural history museum, but newer and brighter. There’s just one small floor of jarred bambinos and gnarled bones. It’s up top. Follow the arrows, greedily. 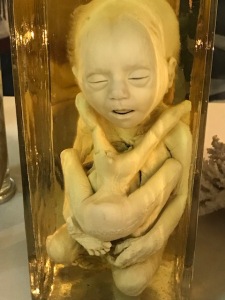 It’s pretty good — three stars — but not quite enough to nourish its reputation as a world-class repository of the ghastly. I went for the morbid, not the ethnography, and found myself in and out in 30 minutes or less.

I don’t want to knock its Russian counterpart, but the Mütter, as specifically a physician’s institution, is more complete and well-rounded, satisfying the more ambitious demands of creep-seekers. Kunstkamera is very much worth a visit — do go — but know its limitations. While it offers a world of wonder, the Mütter offers galaxies.

If jarred fetuses bother you, if pickled body parts give you the heebie-jeebies, look away, click away. You have two seconds …

For my tiresomely upcoming trip to St. Petersburg, Russia, I’ve found the East’s beautiful cousin to America’s incomparable cathedral of the grisly, the Mütter Museum in Philadelphia. It’s the Kunstkamera Museum, aka the Peter the Great Museum of Anthropology and Ethnography. I have to quote the web to get it right and concise (apologies):

“The Kunstkamera is the first museum in Russia. Established by Peter the Great and completed in 1727, it hosts a collection of almost 2,000,000 items. Peter’s museum was a cabinet of curiosities dedicated to preserving ‘natural and human curiosities and rarities.’ “

Now let’s get to jarred babies. To unvarnished ghoulishness. To this:

I’ll get to more such stuff for you, via words and pictures, when I get there in a week or so. I imagine this is a mummy, or someone took a picture of me after last night’s bender.

Now some beauty before we all upchuck. The museum resides in a typically wedding-cakish palace-like edifice so common in St. Petersburg:

Right, but let’s not forget its contents:

Reviewing the museum online, a visitor notes that a highlight is the “fetus floor” (well, yeah); another notes the evocative scientific instruments (probably chilling in a “Dead Ringers” way); and yet one more declares: “After traveling over 50 countries, that’s the most bizzare thing I’ve ever seen in my life. It’s really gross.” (Jittery excitement.)

Why is this appealing? I can’t quite nail it, but I know it’s the same reason why wide-eyed, slack-jawed throngs packed freak shows of yore, why giggly gaggles of school children are whisked to the Mütter Museum, why macabre taxidermy and bone specimens are top sellers at the crowd-pleasing Evolution store in New York’s SoHo. 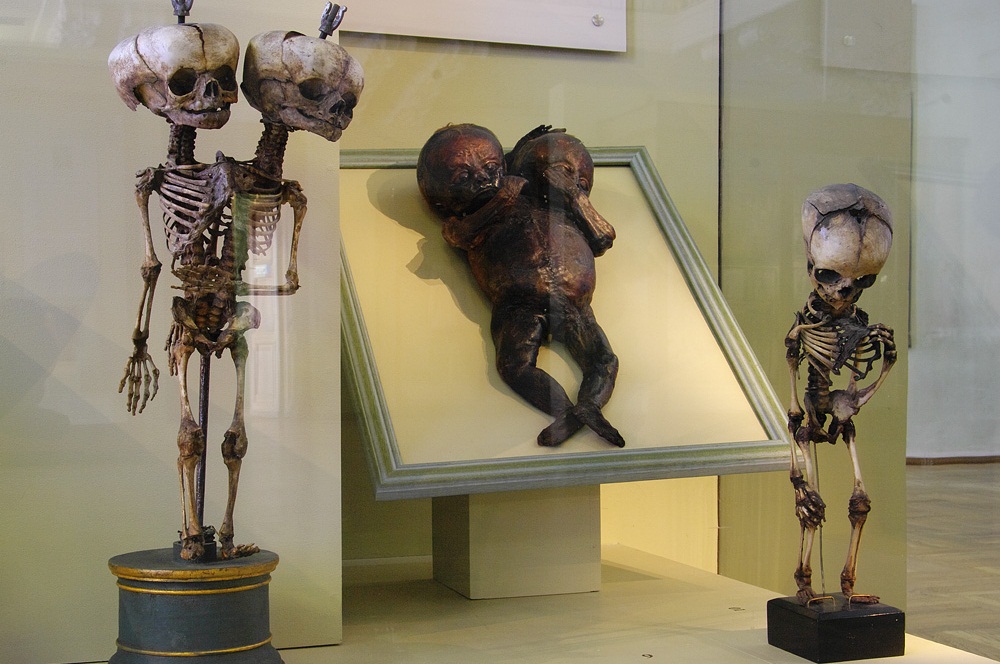 We are curious about mystery, the outré, the weird and wondrous. We are strangely enriched and even, with a flinch, comforted confronting the repellent and gasp-inducing. It’s not a game. Gallows humor may tinge the experience — hey, that looks like Uncle Mike! — but it’s surely not ha-ha funny. It’s about expanding the mind and the world of earthly experience. It is, with a peculiar poignance, about us.