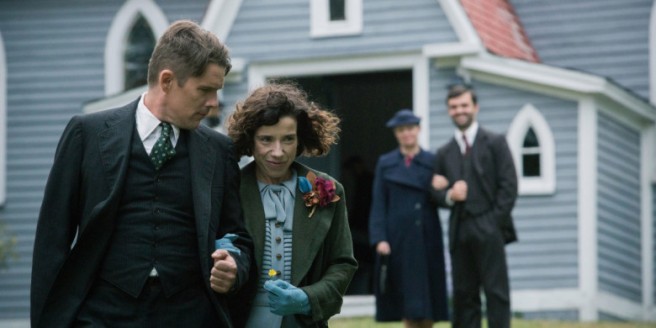 It’s a Tuesday matinée and tickets are a chest-clutchingly cheap $7. The darkened theater is, per usual, populated with nattering, dithering geriatrics, clogging the entrance and doddering up the aisle as I stand impatiently, sighingly, behind them. “Jesus,” I finally mutter as I squeeze past a stolid body. Then I think: “Christ, this movie better match its unanimously rapturous reviews.” I lean back, put a foot up.

The movie is a splendor, something immoderately special. Inchworm slow and ear-cuppingly quiet, it’s a doozie about an eccentric couple, a painter and a fishmonger, that somehow, against bounteous, brittle odds, stays together and loves one another. My eyes moistened. Hawkins, all aquiver, like an injured sparrow — devastating. Two unwell people, frail and difficult, made me conscious of death and illness and curdled personalities, misanthropy, shyness, pain. It was scary. A fine work of art, if not altogether pleasant. I will see it again. I like my movies rather agonizing.

Also pretty agonizing are other peoples’ movie lists, bests and worsts. I take them personally; I get gastric distress when I read them, always. The New York Times recently proclaimed its 25 Best Films of the 21st Century, and it’s a muscular litany of durable art: “Boyhood,” “Eternal Sunshine of the Spotless Mind,” “Moonlight,” “There Will Be Blood,” “Yi Yi” and so forth. (Although it also lauds the quizzically overestimated “Inside Llewyn Davis.” I’ve seen it twice. It’s still as vapid as drywall.)

The list tips its hat to the Dardennes brothers’ 2006 neo-realist ordeal “L’Enfant,” which I, in my professional film critic days, named one of the best films of the aughts. This in mind, I rewatched it the other day. It was about half as good as I remember it.

Loose-limbed and one-note, with a pleading social conscience worn on its tattered sleeve, “L’Enfant” is a chiseled moral tale about a poor teen couple that’s just had a baby. She loves the child while he, a tragically inept thief, turns around and sells it on the black market. He is a dim young man.

The film’s verite grit is bulldozed on and you feel dirty and battered hanging out in its fearsomely authentic demimonde. I adored it on first viewing, and many people still do. I wonder if they’ve watched it recently. You can tell the movie’s final shot is supposed to tear you apart, and I’m sure it did when I saw it 11 years ago. Not now. It’s a little pushy and mawkish and more than a mite manipulative. You can see right off that it’s going to dwell for an eternity on the couple crying together then go black — not fade, but a hard cut to black, then credits. And that’s what happens. I wasn’t buying it.

That confessed, I still like the film; I’m just seeing it through a heightened critical prism. That happens. You can be hard on a work of art but still enjoy and appreciate it. Take “The Big Sick,” the praise-spangled rom-com starring the charming and funny Kumail Nanjiani and the always swell Zoe Kazan, whose quirky luminosity lights a fire under the low-temperature affair.

It’s wry, cute, droll, vaguely touching, but it never gets there. I liked it — I’d give it a B — but not as much as I felt I was supposed to. It’s mild and soft when it should bite, cutesy when it should be real. It’s also, at close to two hours, about 30 minutes too long.

Amid the crush of hosannas for “The Big Sick” I feel like a party-pooper, the sole hater swirling alone in outer space, far from its admirers. Be thankful: In space no one can hear you grouse.