The quote about writing from “Death in Venice” novelist Mann has for decades been my favorite assessment of the craft, even, if you will, my mantra. I present it because just days ago in The New York Times an op-ed writer echoed it crisply: “If you find writing easy, you’re doing it wrong.” This is something I have staunchly believed, and still do. Writing’s a bitch.

I’ve written so long and hard that my head hurt, that I’ve become physically wobbly, a wet noodle. And compounding the physical complaints was the inexorably depressing notion that what I just spent hours extracting, exhuming, molding and crafting was irrefutable crap.

“There is nothing to writing. All you do is sit down at a typewriter and bleed.” — Ernest Hemingway

A journalist colleague once called me a bleeder, because I am so slow and painstaking a writer. I’ve spent six hours on a 700-word article, I’m ashamed to admit. That isn’t the norm, but it also isn’t uncommon. Every word — no: every syllable — counts.

My best friend as a writer is so rudimentary I shouldn’t even have to mention it, and that’s reading. Yet I know many writers who don’t get this. What reliably dumbfounds me is how little so many of them actually, actively read. Television has usurped reading as a cultural pastime, confused as literature as it is. I guarantee watching TV is not going to improve one’s prose skills (teleplay-writing skills, maybe). Too many would-be writers are aspiring illiterates. A fact.

As the greats have harrumphed :

“The greatest part of a writer’s time is spent in reading, in order to write; a man will turn over half a library to make one book.” — Samuel Johnson

“Write. Rewrite. When not writing or rewriting, read. I know of no shortcuts.” — Larry L. King 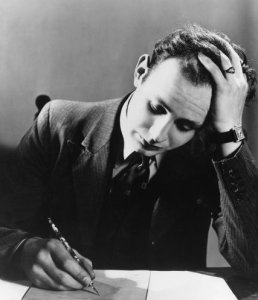 Done correctly, writing is work, grueling toil. It’s fun (when it’s going well), but not that much fun. Still, creating and thinking are so gratifying that it’s worth it. It takes time, hours and hours. Listen to Louis Menand of The New Yorker:

“Writing, for 99-percent of people who do it, is the opposite of spontaneous. Chattiness, slanginess, in-your-face-ness, and any other features of writing that are conventionally characterized as ‘like speech’ are usually the results of laborious experimentation, revision, calibration, walks around the block, and recalibration. … Writers are not mere copyists of language; they are polishers, embellishers, perfecters. They spend hours getting the timing right so that what they write sounds completely unrehearsed.”

That’s as hard as it sounds, and, without the most gimlet-eyed editor, failure is inevitable. But we try. We do the work. We grind, grope for the felicitous simile and metaphor, strive for the perfect punctuation, the poetic stroke, the tickling aside. We do, yes, bleed. Sympathy is unfitting for such a self-involved venture. The only reward is to be read.