“We love our single diners!” gushed the genial manager at Girl & the Goat in Chicago on a recent Thursday night. I believed her. She was sincere, direct and almost giddy.

I was eating alone, again, as I do when I travel solo, which is 99-percent of the time. Have no pity. This is something I relish, the quietude and solitude of dining companionless. Not that I don’t like eating with others. I do. But solo is its own sensation — cool, uncluttered, zen.

I’ve eaten alone in restaurants around the world scores if not hundreds of times. What once might have been a mite squirmy and self-conscious is now a cinch, and a joy. Like going to the movies alone (the best way), eating singly is woefully underrated. (Haunting bars solo is a lonelier proposition, but it’s still totally doable, at times even rewarding.)

Eateries have evolved and they are now equipped, ready and happily accommodating of the one-man show. I have no, er, reservations about making a reservation for one, and the staffers on the other end never pause, hiccup or flinch when they hear that some weird single guy is coming. Nowadays a table for one is entirely normal. Any uncomfortable vibes are coming from your end only. I’ve never felt strange or alienated dining out with me and myself. 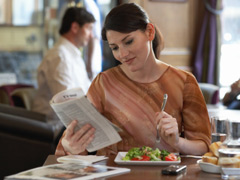 Go. Relax. Be seated and order a cocktail or a glass of wine. I used to bring reading material to the table, a magazine or travel guide — like the hapless fellow in “The Cook, the Thief, His Wife and Her Lover” — but no more. (For one, it’s invariably too dark to read anything. I’m at the point where I have to use the light of the table’s feeble candle to read the menu.) And I’m not one to obsessively tap, scroll and stare hypnotically at my smartphone. So I instead observe, look around and listen — the time-honored sport of people watching.

When it’s early, well before the dinner crush, I’m known to sit at the bar with my laptop and have a small bite and a beer, which I did last week at Longman & Eagle in Chicago, a winsome gastropub with a kicky, rustic flair. I emailed ahead for the best hours to pull out a computer and to confirm the place has free Wi-Fi.

Any stigma attached to the idea of lone dining is dated and moribund. At Avec in Chicago I sat at the bar with an unbroken row of single diners. A few chatted with the stranger next to them, others (me) kept to themselves and saved conversation for the empathetic, fiercely attentive server who coddled me just enough that I didn’t feel fawned over.

There are perils to eating out alone. Servers tend to have the urge to rush the meal, so if I’ve ordered three courses, instead of staggering them leisurely, the server will pile them on, and I wind up with three full plates waiting to be tackled at once. I call this shoving food down your throat and shoving you out the door (this has happened to me at least three times recently). Rushing the plates, it’s as if the lone eater cannot be left without something in front of him, lest he perish from loneliness.

Tip: Sit at the bar. Servers tend to be more attentive and personalized and there’s less of a chance of a plate pile-up because the area is busier and service slows somewhat. Communication, from illuminating details about the menu to cordial chit-chat, reigns.

Plus, the scenery at the bar is superior — a stool with a view. If you’re lucky, there’s an open kitchen, where you can witness the artful commotion of chefs in the tentacled frenzy of culinary creation. Bodies swerve and dodge, flames lick the ceiling, delicacies are chopped and seared and tossed, plates are decorated as meticulously as a Buddhist sand mandala. Art happens. For the wide-eyed foodie, it’s the frisson of salivating spectacle, a bonus main course, with extra dessert.