I don’t care what they’re doing, where they are, or what condition they’re in — donkeys unfailingly crack my heart. That includes old brooding Eeyore, even if his despondency seems almost willed, like the chump shrugged and gave up and became a droopy black cloud of clinical donkey depression. (How does chipper Pooh put up with him?)

Eeyore, a stuffed animal held captive by Disney, isn’t my concern. It’s real donkeys, which always look pitifully downcast, afflicted and abused. I’ve seen them in Egypt, Turkey, Syria, China, Thailand, India, Mexico, Morocco. These distant relatives of horses are exploited largely as beasts of burden, weighed down with pound after backbreaking pound of cargo, whipped and lashed, mostly in Asia and Africa. In China, which owns the bulk of the world’s 41 million donkeys, donkey meat is a delicacy. (Alongside cat, dog, rat, shark, horse, snake, porcupine, raccoon, deer — it’s a hell of a menu.)

I was reminded of the donkey plight — I generally try to banish thoughts of wretched pack animals — when I was distracted by an online ad for the Indian animal sanctuary Animal Rahat, which rescues cows, bulls, dogs, birds, camels, snakes, donkeys and more from rampant hazards, neglect and abuse across the despairing subcontinent.

The ad spotlighted donkeys, which, as mentioned, I reserve a soft spot for. Photos of emaciated, crestfallen, injured animals accompanied a plea to sponsor donkeys for as low as $12. That donation would provide vaccinations and antibiotics for 30 donkeys. I immediately clicked my PayPal account. (The donation funnels through PETA, which sends it to Animal Rahat.)

The creatures have it as bad as imagined, and worse. Says Animal Rahat:

“It’s a common belief in India that ‘beasts of burden’ don’t need as much nourishment as other animals, so they are commonly left to scavenge through garbage piles to find food scraps. It’s only a matter of time before our vets are called out to provide these neglected animals with emergency treatment after they swallow plastic and sharp objects.”

I read more, I donated more. I’m in the mood. I know this is Covid-19’s moment, but animal causes are in perpetual panic. The virus is exacerbating the situation. I’ve also given money to PETA, two local animal shelters and the SPCA. I’m sure I’ll do more.

The damn donkeys. They captured my heart, with those big dewy eyes, pointy vertical ears and stout mini-horse bodies. The mounds of bricks strapped to their backs didn’t hurt. Maybe I’m a pushover, a fool. Maybe I’m one of them, just an incurable jackass. Fine. 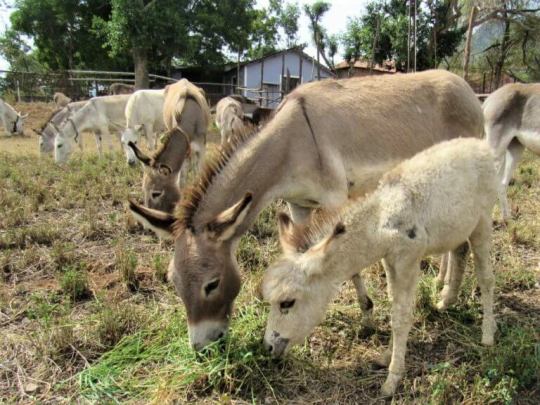 (“Rahat,” incidentally, means “carefreeness” or “insouciance” in Urdu. I like it. For more about Animal Rahat, go here.)

2 thoughts on “Pin the tail on a good cause”