The coolest friend I met on back-to-back trips to Istanbul was a dog.

I met the stray during a May visit and then, staying in the same area of Sultanahmet, met up with her again in October. She recognized me immediately and we enjoyed a fast, happy reunion. She jumped on me and her tail swept like a furious broom.

Stray dogs are plentiful in Istanbul and are protected by the city. Each dog is registered, one of their ears pierced with an official tag. My pal wore a red tag on her floppy left ear, leading me, with a poverty of imagination, to call her Red Tag. 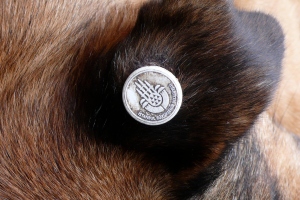 Medium-sized, camel-colored and sweet as a peach, Red Tag wasn’t always around and she didn’t follow me through the city. She had a life of her own. I would see her by my boutique hotel in the morning and in the evening, and she would sit near me at my nearby watering hole at night. One night she hung out with a group of people as we caroused by the Hagia Sophia, staying up till dawn, a trooper.

I didn’t spoil Red Tag, though I did occasionally buy her a can of tuna to nosh on as a treat. Street dogs unavoidably crack my heart, and my first instinct is to feed them. Near Gallipoli, Turkey, I bought a stray puppy a can of tuna that she gobbled up gratefully.

It’s not always so. In India I bought some peanuts, the only nearby food, for a crazy puppy that ignored the offering. Another Indian dog rebuffed the samosa I tried to give it. Rice wasn’t appreciated by mongrels in Vietnam. For some reason I assumed these derelict doggies would eat anything.

These memories bubbled up while reading a recent story about street dogs in The New York Times titled “Stray Dogs Started Turning Blue. Then the Street Mobilized.” It’s a great, heartening article about how well strays in India are treated and protected. Even though I’ve been to India, it’s an eye-opener:

“India has some of the most pro-dog laws on the planet. It is illegal here to kill healthy strays, and the result is millions of them — perhaps as many as 30 million across the country. Packs of dogs trot through the parks, hang around restaurants for scraps (which they usually get), and sprawl on their bellies inside railway stations as rushing commuters leap over them.”

This is a far cry from, say, China, where dogs are rounded up as people food or killed outright as pests. Sickening.

In Hanoi I saw an actual “dog restaurant.” Outside was a silver bowl filled with cooked dog paws and, ironically, a chained German shepherd serving as a guard dog. Eating dog is a kind of virility ritual — it’s a guy thing — and when a table of drunken men spotted me spotting them, they tried to rope me to their table, yelling and gesticulating. Later, in an open-air market, I saw dog carcasses basted like turkeys for sale.

Is this cruelty or culture? A culture of cruelty, I say. But let’s not wade into pitched arguments of moral relativism and abject hypocrisy here and now. Later. Maybe.

Red Tag, terrible as it is to think, has probably passed by now. It’s been a while and she seemed to have some age-related arthritic issues when we hung out. She was kind of a loner, but I saw she had friends that curiously looked a lot like her. She was protected by a big-hearted city that coddles its stray dog population, much as India is demonstrating to its mutts and mongrels. I always feel so bad for street dogs in my travels — mangy, mistreated, malnourished. This delivers a whisper of hope.